Culture, failure, and strategy at the Chief Innovation Officer Summit 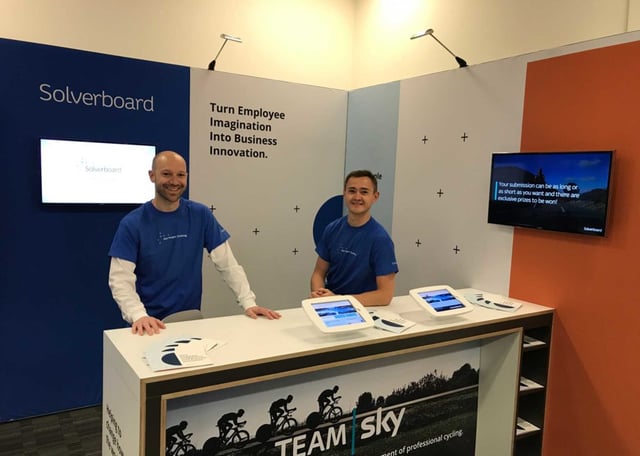 Sometimes, you go to a conference and it turns out that almost all the speakers there are saying the same thing, in slightly different ways. That sounds like a bad thing (or a very boring conference), but in this case, it wasn’t.Solverboard (well, some of us) went to the Chief Innovation Officer Summit last week in London, and had a highly successful couple of days. Aaron and Toby from our Customer Success team manned the stand and had many useful conversations with delegates, while I got to be the roving reporter and attend the speaker sessions, and talk to some fascinating people in the breaks.

Somewhere around the end of the first day (according to my scribbled notes) I realised that some common themes were emerging from almost all the speaker sessions, and as they closely echoed the conversations we’ve been having at Solverboard over the past few weeks, this was both extremely reassuring and a useful validation of our thinking. So here they are.

This was the big one. Almost every speaker focused on culture and culture change as the key factor in successful innovation. From Ana Jakimovska at Sky News discussing the workshops they held to bring everyone in the newsroom along on the innovation journey, to Rebecca Evans of Emerald Publishing saying ‘Innovation is fundamentally about culture change’ and heralding the process of working on innovation in the business as ‘transformational’, to the fabulous Viv Goldstein of GE telling us that the two pillars of their Fastworks innovation programme were mechanics and mindset, culture change came up again and again. Essentially, the message was that if your organisation does not currently have an innovation culture, then you need to build one.

Different organisations approached this challenge in different ways. At Emerald, it was about building communities of practice that were truly collaborative, rather than leadership-based. At GE, they completely changed their values and the way people were assessed and rewarded, to alter the way their people thought and acted – no more performance appraisals, which is a radical step for a huge corporate. At Aviva, in a fairly staid industry that has so far resisted major disruption due to regulatory and financial barriers, Serge Taborin got around the problem by running a skunkworks-style innovation team separately to achieve pace and speed, and implementing a separate transformation programme in the main business to bring it up to speed.

In every instance, these organisations wanted to promote experimentation, constructive conflict, risk, and pace across multiple small trials rather than the cumbersome large-scale projects of the past. Which brings me on nicely to the next theme:

Ah, failure. Failure is an inherent part of innovation, but what struck me most wasn’t the fact that it’s hard for large, bureaucratic and traditional organisations to cope with failure, but how willing the speakers were to talk honestly about it. For someone who has spent her whole career managing organisational reputation in one form or another, this is a hugely refreshing shift from the ‘for god’s sake don’t tell anyone about THAT’ attitude of the past. The award for the best-told tale definitely goes to Craig Cooksley of Trinity Mirror, whose presentation was a blunt, honest and salutary reminder of how innovation programmes can go wrong (on that note, don’t run focus groups. Just don’t.) Viv Goldstein told us the story of GE’s Durathon batteries and their investment in a manufacturing plant for a technology that just did not sell. All speakers emphasised that the failures had been hugely beneficial in terms of sparking new ideas or ways of approaching innovation - even Sky News’ Reign Game, which made their newsroom ‘very concerned’ as initially it involved the Queen herself as the main character in an old-school platform video game (if the character keeps getting killed, is that digital treason?)

The challenge of strategy

The third and last theme was strategy – and more specifically, the challenges faced by organisations as part of that strategy.

Identifying organisational challenges, and aligning your innovation programme with those challenges in order to help deliver the strategy was a recurring topic. James Browne of Philips discussed the importance of "real, positive, meaningful innovation” that solves problems that matter to customers. Innovation for innovation’s sake is generally not terribly useful, and whether you adopt the skunkworks approach like Aviva, make innovation part of every single part of your business like GE, or work with an organisation like The Bakery to partner with agile startups to innovate, if you don’t start with the problems your organisation faces, and spend time defining and framing them carefully, you will run into trouble.

So what has this got to do with Solverboard? Well, we’ve been thinking a lot about how to help our customers make their innovation programmes successful. We all know that you can’t just put a tool or platform in, stand back and expect innovation to happen, even if the tool is as great as Solverboard. The message from the Summit is loud and clear – without culture change, this approach is doomed to failure. So we’re working on our Solverboard Custom offer: taking the Solverboard platform at its core, it combines strategic consultancy, tailored support and culture change programmes to give our customers the best chance of success (with just the right amount of failure in there, too). Talk to us to find out more.