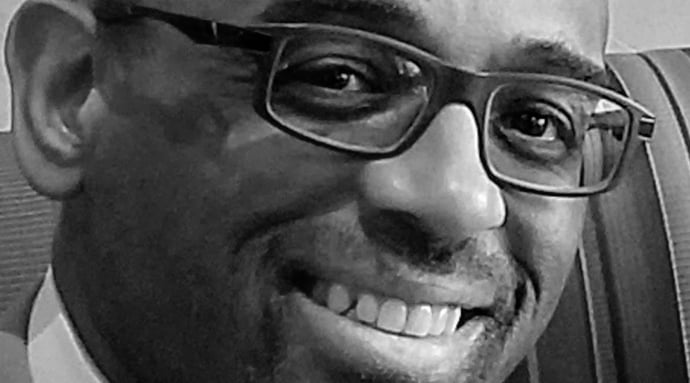 One of the key challenges that innovators face is finding their purpose. Here’s how a cop-turned-coach and management consultant found his.

One of the key challenges that innovators face is finding their purpose: what we define as innovation ikigai. Without knowing the purpose of your innovations – and how that purpose aligns with your strategic goals – success can be tough.

Find your own ikigai with our simple (and free) template

This purpose can be fluid or can take years to fully define. This was the case for Tyrome Smith. His current roles – as a trainer, facilitator, negotiator and organisational development consultant – are a world away from his very first job as a police officer. We spoke to Tyrome to understand exactly how he found his own innovation ikigai, and why he believes purpose is so important.

From cop to coach

In 1986, at just 18 years old, Tyrome became a police officer. He cites two reasons for this decision: the first, that he was bored of working in a fast-food restaurant. The second was that he would be following in his father’s footsteps. “It was a way for me to connect with him”, he recalls.

Describing the role as “quite fun at first”, things changed. An arrest that became close to police brutality made him realise that the role was antithetical to how he wanted to live his life. From there, he progressed to working with young people who were adjudicated and in lockup, helping them to make sure they stayed out of jail.

“It was a wonderful experience”, says Tyrome. “It taught me a lot about how humans develop, and how they understand the world”.

His experiences led him to complete an MA in Human Communication. “I was working not just with adjudicated children, but with psychiatrically unwell children”, he says. “And I was watching things that I didn’t quite understand”. A class in Group Dynamics gave him a greater understanding of what he was seeing in the psychiatric ward, and what he was experiencing in the communities he served as a police officer.

It also served him well in the other important area of his life: as a track and field coach, which he began to do after a career as a champion hurdler in his younger days. All of these experiences together helped him to get closer to understanding his true ikigai.

“If you look at my love for coaching, teaching and helping people grow”, he explains, “and the idea of watching not just the theory of relationships and social systems, but also the practice and understanding of how people engage in those social systems in terms of authority and leadership, that’s where you get Ty Smith. That’s how I live right now.”

Reflecting on your purpose

Tyrome is adamant that he never could have predicted when he first started working, where he would be now. However, this is no bad thing. Purpose is something that he believes is not necessarily clear at the start, and which may not develop in a linear, obvious way. He uses Paulo Coelho’s best-selling novel, The Alchemist, to explain his point.

What’s your innovation purpose? Find out with our free tool

“It’s not a self-help book. It’s an allegory – a story about how you find your purpose”, he says. “The primary idea is that when you are on your journey, the universe will conspire to get you to that purpose, no matter how confounding and confusing it is. It’s painful, but trust the journey.”

35 years ago, Tyrome could not have predicted that he would be a senior consultant working with senior executives, the US Federal Government, developing strategy for national security issues. However, reading The Alchemist gave him much to reflect on when looking back at his career path to date.

When it's not right

“In The Alchemist, what ends up happening is that you want to do one thing, and the universe says no”, says Tyrome.

“The opportunity literally just showed up”, he says. “I was sitting at work and got a call saying that a client was looking for a replacement Vice President at HBO in New York”. Initially, his answer was no: he had no desire to relocate to New York. But when he learned more about the role (Vice President of Organisational Learning and Dynamics) and the salary (significant), he applied and got the job.

However, he reveals, they were looking for a manager, not a consultant. While Tyrome wanted to solve problems, they simply wanted to make problems go away. Because of the upheaval he had put himself and his family through to relocate, he stayed in the role for a year and a half.

“I was miserable”, he says. “It was a painful lesson about following your purpose. It was a clear lesson in making sure – as in The Alchemist – that you trust your path. Find the thing that you’d like to do, understand it, and develop a way to accomplish it.”

While the HBO role may not have been right for Tyrome’s purpose, his time spent in New York was not in vain. After returning to work at the same government agencies as before, he quickly realised that what he had learned at HBO was invaluable.

“It enabled me to develop a value proposition for the organisation I was embedded with”, he recounts. “I was hugely successful. I had my bosses, my managers saying that they didn’t know what I was doing, but that I should keep doing it.”

One of the most powerful things he learned was to ask questions. Questions like, “That makes no sense to me, could you help me understand that?”, or “Are you saying this because that’s what you’ve always done, or is that creating value?”

Working within a government agency, getting across the idea of creating value has been a challenge. “They’ll say to me, well we don’t sell anything, so how do we create value?” By shifting their perception so they understand that they are in fact a business, Tyrome has been able to help them to increase their value.

Purpose is important – but can it hold you back?

Tyrome describes how different the innovation work that he does in a government setting is from that done in a commercial setting. “Businesses will say, we’re innovating because we’re trying to drive greater shareholder value or a greater value to the market”, he explains. “I work in the national security space, where it’s more a case of, if I don’t do this, people could potentially die”.

In his setting, innovation is about maintaining the mission but also dealing with the speed of change. “The mission of national security is figuring out the nation's status and, once defined, trying to maintain the position and deal with both state and non-state actors so we can continue on and thrive”.

Tyrome’s worry is that this central mission can also hold organisations back. “It tends to limit their thinking”, he says. He uses the example of the availability of external resources that could accelerate the organisation’s mission, but which the organisation will not use as they didn’t make it, and therefore do not trust it.

“Alex Osterwalder talks about buying down risk”, he adds. “Where is the sweet spot between the idea and perfect, without spending all of your capital on being perfect?”.

Who is driving the purpose?

“Sometimes, an organisation’s clarity of purpose gets in the way of their capacity to change”, says Tyrome. They will be so focused on working to achieve their purpose that they fail to reassess at regular intervals.

Solverboard is the only platform you need to find, test and deliver great innovative ideas within your organisation – learn more here

“I’m dealing with some situations right now where the organisation will say, we have a long list of everything the customers have asked for”, he explains. “The issue is that they’ve been working on that list for the last five years, and can’t remember the last time they actually spoke to the customer about their requirements”.

In situations like this, the organisation needs to clarify who is actually driving that purpose. Is it the customer? Is it the shareholders? Is it the individual responsible for innovation, who is simply focused on keeping out of trouble?

Ikigai is a concept that Tyrome has encountered in his group relations work with the AK Rice Institute. “To me”, he says, “ikigai is a model I can put my thoughts around. It’s about helping people understand how to discover where their social self meets their technical self – and how they can bring those two together to create meaning.”

Like much of what Tyrome does, it’s about asking questions to help – either yourself or others – to figure out what they want to do, and where they want to be. With that ethos, you can truly start to define your innovation purpose.

Many thanks to Tyrome for taking the time to talk to us. If you’re looking to streamline and manage your own innovation to work towards your ikigai, find out how Solverboard can help.