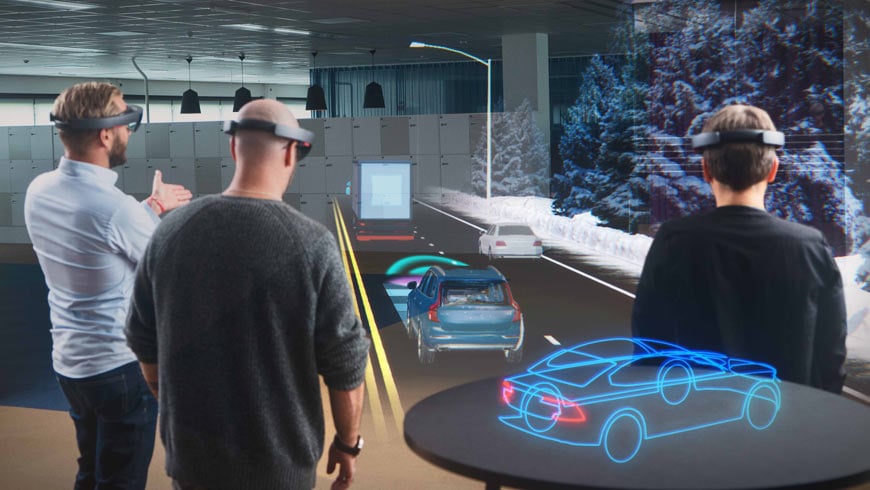 The continuing trend for flexible and remote working means collaboration matters now more than ever. But how close are we to realising the holographic meetings predicted by science fiction?

In 2018, the Office of National Statistics (ONS) revealed an increase of almost 75 percent for home working over the last decade, and various sources suggest that 50 percent of work will be done from home by 2020. Fast Company offer the view that this might be too simplistic, and it just means that more people will spend more time out of the office. One thing is certain: flexible working means that our workforce will need to connect effectively from a distance one way or another.

As we know, video conference calls are an excellent way to convey emotion via visual cues and facial expressions, that you don’t get with other forms of digital communication, and meeting platforms incorporating video calls such as Microsoft Teams, Skype and Zoom are already well established.

A study conducted by Forrester Consulting on behalf of Polycom in 2018 found that 84 percent of companies use a cloud-based video conferencing app, but that 96 percent face challenges managing it. Some of the reasons cited for difficulties with video conferencing were “difficulty in connecting to calls, delayed video calls, and poor call quality”. Ask a friend or colleague about their experience of video conference calls and they’ll probably reference something like this.

And that’s just audio and video. Arguably, there’s an infrastructure issue to consider before we could see the adoption of new technology like Virtual Reality (VR) and Augmented Reality (AR). These environments will use far more data, and therefore require a highly capable and low-latency (minimal delay) infrastructure to support it.

A need for speed

Ofcom report that whilst 94% of UK homes and businesses have coverage of “superfast” broadband at 30Mbps (Megabits per second), only 45% of homes currently subscribe to it. Where mobile technology is concerned, 23% of homes and businesses do not have good 4G coverage from all operators. (Connected Nations report, 2018 - Ofcom).

EE have announced that 5G is due an imminent rollout in major cities in the UK this year, with parts of London already enabled, and the rest of the UK to follow over the next year or so. Vodafone have already enabled parts of central Bristol, and will be selling 5G-enabled handsets from 3 July.

Real-world speeds are still a bit of an unknown, depending on variables such as number of devices connected to the network, signal quality, and device type, but ambitious estimates suggest it will be around 1,000 times faster than current 4G speeds (100Mbps), and more conservative estimates suggest it will be 100 times faster. These estimates place 5G speeds between 1-10Gbps, the top end of which would enable users to download an HD movie in under a second. Ideal then, surely, for hosting your holographic colleagues in a fully-immersive virtual reality environment?

Researchers and tech companies have been working on a variety of methods for virtual communication over the last few years, ranging from the larger than life TeleHuman 2, produced by Queen's University in Ontario, (which uses a camera array to capture a participant and project them elsewhere into a human-sized pod) to the slightly more compact HoloLens from Microsoft [pictured above].

The headset, a “mixed-reality” device in it’s own right, has also allowed platforms such as Spatial to build upon the tech and offer “collaborative office environments” in augmented reality. Couple this with the recent news that MagicLeap have acquired Mimesys, creators of “spatial co-presence technologies”, and it seems clear that the business applications of using AR is gaining traction.

The software to enable developers to build such experiences is also improving rapidly. Apple announced the latest version of their ARKit (Augmented Reality Kit) at their Worldwide Developers Conference (WWDC 2019) keynote last week. The current version of the software allows developers to create immersive virtual environments with real-time human tracking, and this latest version, ARKit 3, incorporates multiple face tracking, and machine learning to detect flat shapes in the real-world environment even faster.

Technology like this is fun to explore, of course, but what benefits does it have over video conferencing? Perhaps it isn’t better as such, just different. It may be that current barriers to effective remote communication would be negated as costs of the hardware drop, or mobile solutions are developed, and as infrastructure becomes established enough to properly support it.

In our industry, we’d love to think that meetings between our innovation teams can be held in immersive virtual environments. Although the likelihood, at least for the next few years, is that the 5G roll-out and improved infrastructure in general will improve our video conferencing to the point where stuttering video and “underwater” audio are a distant memory.